Been agonising over this for ages (2 years+).

Do I need or want a better antenna at the home QTH? Every time seem to operate from home for contest etc it involves putting up a dipole as the vertical (Hustler 6BTV) works FB but just doesn't seem as useful for inter G working on 80m and seems limited to working EU stations only. As soon as a dipole or G5RV goes up the US opens up and there is more DX heard.

The recent windy WX in UK had seen a tree limb came down at the bottom of the garden and it bent literally the vertical over at 60 degrees about 5ft AGL and also took out the dipole support. A new length of Ali tube was obtained and antenna is back up again but thought time to consider the options. 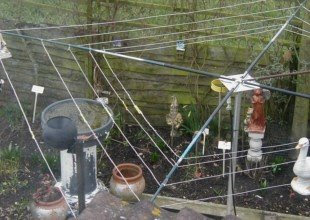 Nice small footprint and will fit on gable end of garage or side of house easily!
Downside is long feeder. 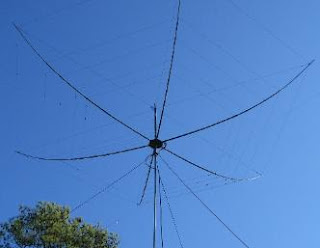 Gain but bigger footprint. c5m radius
Will fit on side of house but not easily!
Downside is also long feeder.

Simple Dipole for 80m or a fan dipole. 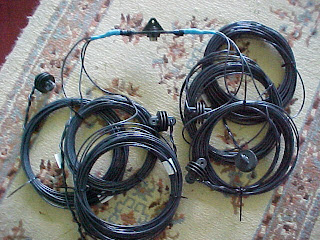 However run into the "wires down the garden XYL and neighbour problems".

I have a small vaccum capacitor bought at Friedrichsafen 2007 and a gear box of Mecano Gears and inners from a small hand drill. See this site for one option http://www.qsl.net/hb9mtn/hb9mtn_magnet_80.html

Maybe could build this and put in attic?

Do nothing and stick with vertical and temporary dipoles (maybe end result depending on planning) and add a sloping wire from house to the shack with a tall support at the shack end, would result in about a 50m run which is enough for a 160m 1/4 wave. like this: 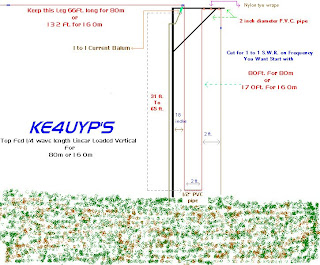 The ground system could/would need to be be improved as well so I picked up a few extra ground spikes that were on sale at B&Q.

So bought a couple dozen 5m telescoping fishing poles and will start a 'shoot off' as I will construct the cobweb and hexbeams for all bands 10m through 20m. And a mag loop for 40m and 80m. For 160m I will look at the sloper and any other antenna designs I have seen.

I might end up having to stick with the vertical and a dipole but this might be fun.

As I progress will post the results and which tuners worked best if needed.

My rear garden is larger than most at > 50m long but narrow 15m, It runs N-S with shack at South, house at North. I have 2 large 60ft+ poplar trees next door to the East. No cannot use them I asked but it is tempting to fire a line over them but when windy the tops whip about a lot so any antenna would be shredded or drag the shack with it!
All activity will be QRP only.
Posted by M1KTA at 08:33

'Been 2½ tears since your posting of the antenna dilemma, did you have any luck with the Cobbweb design? If so, what's you preference, that or an Hex-beam?