A bit late to the party but building my sputnik after Mike AA1TJ http://aa1tj.blogspot.com/2011/07/sputnik-qso-party-transmitter-prototype.html had sent me a pair of valves. 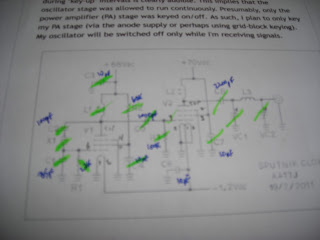 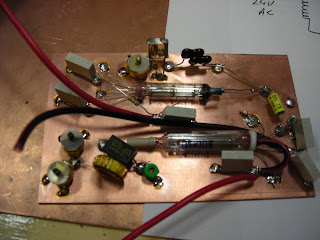 This is just part way through the build, manhatten style. I amended a couple of components. Got to add the key and power lines including the resistor drop for V1.

The PSU starts off as a 24V AC supply (Maplin) that is voltage doubled and rectified to c71.9V DC and following advice from G6ALB, Andy I will negative block key the TX so the same PSU generates -36.4V DC. I botched the original build and  let out lots of magic smoke as I  connected the diode generating thenegative voltage across the AC input... oops! Once built I ran if for 45 minutes just to make sure I had not killed anything else. I added a second LED (green) to the negative output so I can confirm both the main HT and the negative. 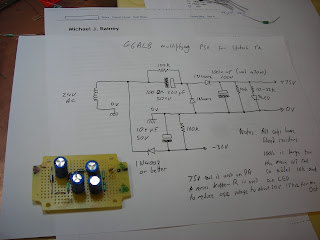 Note I did not have any 100V electrolytics for the last output stage so I used the practice of doubling up the capacitors to get an adequate voltage rating and put two in series rated at 63V each with 100K bleed resistors on both. So you see 4 on the circuit not 3 as per diagram.

The HT PSU was built into a small potting box.

The rig I have built into a nice Hammond enclosure as I had already cut some PCB and it just slides in. The enclosure is one where one side slides off as I am sure I'll need to adjust those variable caps. I did start with a ceramic variable C for C1 but it was too big to fit. 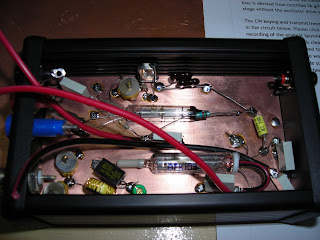 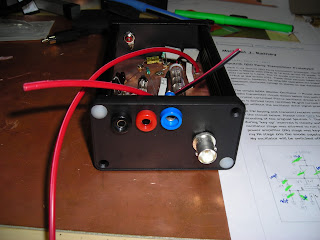