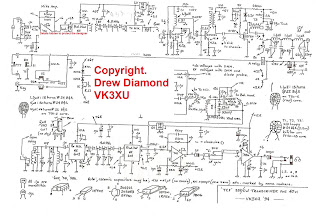 I thought I'd both seen and worked on the SA/NE602/612 Mixer, crystal filter and LM386 AF amp design before for both TX and RX and I forgot where I used this first, then I remembered after gathering some bits together for the October GQRP Rally at Rishworth that Drew Diamond VK3XU designed a TCVR using exactly this. The circuit is above, with some filtering. It is dated 1994 which predates both of the others by 10 years!
In 2003 when I was M3KTA so for those that don't know that is a novice licencee in UK I did a talk at local radio club as all newcombers did and mine was about filters. The maths scares me silly and I could never calculate things correctly so I had homebrewed a VNA, the IV3HEV design had just been published and I obtained a load of sample chips from AD and TI to build it. I also needed a homebrew radio that showed all the filters I wanted to talk about and I could easily build and demo in the talk and the Drew Diamond design was it. On the night I had both a finished TCVR connected up to an antenna and the filter modules cloned on a 'fake' homebrew bench in the lecture. I explained to an audience that definitely knew heaps more than I did about filters and then proceeded to demonstrate the alignment etc using the VNA real time (projected the PC display onto a white board, next to a web camera display showing what I was altering) to show the filter response. The use of the 'real' TCVR with antenna meant I also was able to show some live feedback as the effect of the filters.


I remember some of the members suddenly perked up a bit and a lively discussion of the build and use of the VNA, that cost me maybe £10 to build ($15) started up, especially involving those that used big professional bits of kit with huge price tags. I also went on to show the N2PK VNA kit I had planned on using but was missing a few bits and I ended up ordering 4 sets of components for club members to build their own.

Obviously everyone knows the MiniVNA from IW3HEV now from WiMo etc but this was his first design.

With hindsight showed I was totally niave about amateur radio although I knew what I wanted to show in the talk so built the VNA and the TCVR and spare modules with no thought as to the apparent magnitide of what I had done.


Anyway, I won the club award for a talk that year hihi.

But I KNEW I'd seen the design and use somewhere else before.
Posted by M1KTA at 14:50

Comment on the post.... Just made up an Express PCB mask and etched it, got to drill it yet for the RX side of this, with a modification where I added varicaps (Will start with MVAM109 but could use red LED) and a potentiometer which will make the crystal filter width adjustable. I have a few different IF crystal selections too and might start with 4.9152MHz and as I will use a FCC-1/FCC-2 I should be able to make this a little more frequency agile by adding a bypass to the BPF.