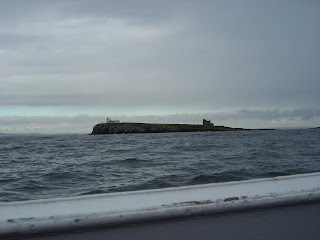 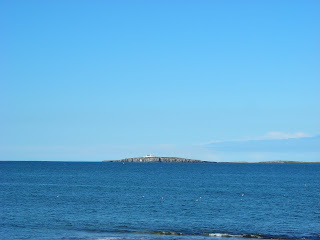 Logistics:
Go to the quay at Seahouses on the Northumbrian coast, catch one of the tourist boats trips around the islands to look at the seals and the sea birds. You HAVE to ask permission from the National Trust warden BEFORE travelling to the island if you wish to activate it. AND even though they do land on the island check with the skipper of the boat that they really will land on the island. No generator ever and battery use only. Nothing can be screwed into the ground and everything must be self supporting. There are two possible islands you can land on Inner Farne (where I was) ans Staple, much further out.
The MVGlad Tidings IV (W Sheil runs the company) took me over to the island (£13 cost) with a couple other brave souls that wanted to see the seals, first thing it was damned wet and pretty miserable on the crossing as it was raining hard. The NT charges £5.30 adult landing fee but as life member no charge... if you go don't forget to take cash to pay it!
Once on the island as you can see from the movie (taken as I started) and the bottom one it cleared up enormously. There are walkways you MUST NOT wander out of as the ground is riddled with Puffin burrows.
Daylight operation between LOCAL time 11am and 4pm (10:00 UTC ad 15:00 UTC) allowed as those are the times the boats land. QRP was fun and great DX possible but 100W would havemade it much easier. Not quite a 'pile up' but constant string of qso from first to last and couple times 2 stations responded at once. I'll analyse the dxcc count later but nothing from G stations but lots from EU and NA.
Been asked several emails can I activate again as 'we were not ready' from one NA station... not this time but might again soon.
Posted by M1KTA at 21:22 No comments: