Well looks like it was almost a straight copy from something from 73 Magazine 1995 by Phil Salas AD5X.

Bought a couple of these clones cheap off ebay for use with a PA/ATU project... anyway they use the CH340 and not the FTDI chipset and i run linux on the destop.... so the arduino IDE had a problem using them.

Fix was simple.... Once you read the error messages.

and then with one board...

then you can use the device and program it etc.
Posted by M1KTA at 20:24 3 comments:

Had a go at RSGB AFS 160m SSB shoutathon at w/e as will probably put them up again for GQRP winter sports. and/or CQWW160m next w/e.

Advised needed to increase the G content of the log so antennas needed to be more horizontal.

The RX side was three antennas I could select (using a simple switch).
1st:
I bought a couple reels of 9 strand litz wire (about 0.9mm OD) so decided a good use was to use for 160m beverage. I rummaged in the junk box and up come two 820 ohm carbon 2W resistors and couple stainless steel ground spikes (ex SM7UCZ were hydraulic tubing used in quartz cutters) so that all became two beverages, both were approximately 300m (whatever wire was on each reel) One fed directly south from the shack across the field (no horses etc in it) at about 8ft agl, used a couple 4m fishing poles to prop it up in the middle, to a tree on the other side, right by the side of the Camb (or a tiny tributary of it). Once in place pulled it taught and tied it off and terminated with the 820ohm resistor and a ground spike.
2nd:
same as 1st but this time roughly running east from shack about the field boundary. Suspended between tree branches this time and did not pull it taught.
3rd:
264 foot so 160m half wavelength long wire over 85ft poplar next door and the one near it so had a sort of high inverted L (yes I know this one would have been better for DX RX, and could hear DL and RU stations on it)

RX was SDRplay with 24" monitor and SDR-console amazing seeing whole of 160m on one screen. Band looked all but empty initially but as contest started the SSB signals appeared.

That was all done in the dark.

The TX side
Plot too short for a 160m dipole so used a loaded dipole with tuning coils wound on two 4pt plastic milk bottles, the wire was salvaged from an old lawn mower extension lead. Ended up with 31T on each. The dipole end up being about 58m total length with the coils about 2/3 from the centre. The wire was 2mm PVC covered flex weave. Fed with 50ohm coax into a 1:1 balun (short ferrite rod). Centre 12.5m AGL, ends about 8m AGL tension applied but placing the fishing poles facing away from the centre. Used two 10m travel poles to keep the traps propped up.
TX was KX3 driving a hastily bodged PA following KD1JV/K0LR/VK3XU design from a pair of IRF510 putting out about 25-30W.

I had a relay shut off RX to the SDR when TX sensed (grabbed from N6BM miniboots) to protect the SDR front end added at last minute.

The whole lot was put up in the dark so to avoid any issues with nosey neighbors and was brought down again before dawn.
Posted by M1KTA at 11:37 No comments:

Homebrew projects move to kickstarter I

Seen a few of these kickstarter projects now. Not all make it, this one seems to have...

The foundation these guys came from, I have built a couple of the 50W PA and the matching ATU, the design started off as something from the ARRL 50W competition a couple years back. So given the community it had a pretty rough/strict peer review, if had not been any good would have failed on the spot.

I have seen the Mezzanine QSK board from the project used in a  couple of QRO PA projects as well. Anyway their latest offering for fans of the soldering iron building kits as opposed to the screwdriver only which is the way some have gone has jumped over to kickstarter.

HobbyPCB is offering their RS-HFIQ 5W SDR on Kickstarter. They are offering a bare PCB for $30 which is probably about as cheap as it gets (I have bought one) if you want a board fully populated and assembled they are there too (honestly not the cheapest ever at $239 for something assembled but certainly worth a look) 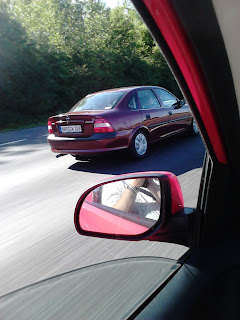 So did OK in the end. 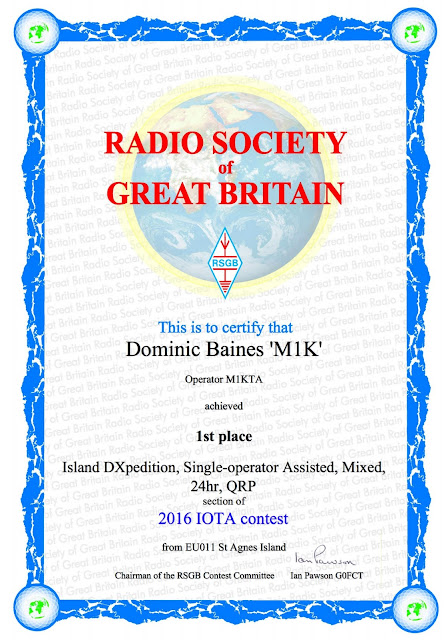 The station and antennas. Not some huge setup. 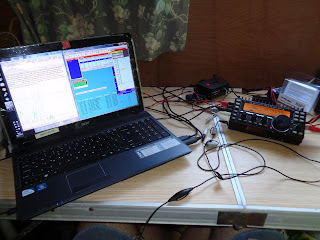 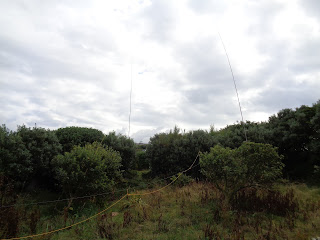 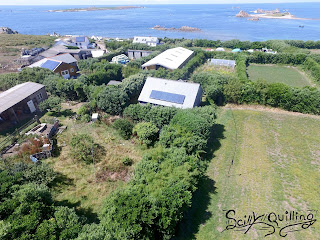 Images of the heat spreader and PCB.

Building this PA for another to pay for QRP DX trips, OK that is an oxymoron, but they would have bought one anyway so thought why not get the QRO op to fund the QRP op :-)
Posted by M1KTA at 06:57 No comments: