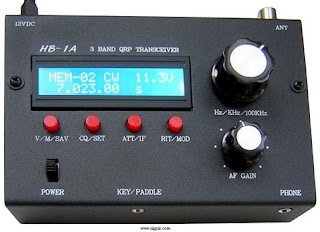 As I want one to play with I noted that kits are available so this morning I bought one.
I will document the build and alignment process.
Added 7th October 2009:
Someone asked for an opinion on the docs....
The kit instructions will be a tad challanging to say the least, for some I expect, if you can understand the operating instructions without re-reading 4 or 5 times and then going through it step by step with the rig and realising "Oh that is what they mean..." then you might understand what I mean . I must say though that some have bashed the designer about the ... ahem.. resist a KX1 clone comment again...about the docs, I don't think that is exactly fair as I am pretty sure the first language isn't English and this was sold in China only initially then 'leaked out' through one or two in Japan.
Almost 10 years ago now I wrote Samba Black Book (600 pages , all about SMB and Linux and Windows) that was translated (I paid for it to be done) into two versions of chinese, simple and complex (China and Taiwan) and I was in Hong Kong then Sydney when it was published had someone working with me at the time who spoke chinese and they said the translations were OK but were very amusing and some of the how to instructions read like a 19th century novel. EIeengriesh, how ever you want to spell it, as we all have learnt to recognise automatic translations from the far east into English for instruction manuals can be amuzing to say the least. That said even between UK-US we cannot agree on some things like color-colour and in US English seems to put z in where we use s (e.g. specialise/specialize). I had to write a version of that book in US English for the US market which was not fun.
For those doing this build too... get a copy of both the HB-1A and KX1 schematic and the ... ahem... the KX1 manual (I built one in 2007 or early 2008), although not a component for component copy, for some of the instructions for things the kit builder has to do other than take out an SMD component and solder it where the mask/schematic says it goes, like wind the torroids it may be of use. Some thing like adjusting the transformersT2 and T3 is for HB-1A only which has no trimmer caps which the KX1 does so you have to think about things. Any technical translation will be a challange for automated software like "Dragon" which I seem to recall is what many use to do the Chinese to English translations. I don't think a human did what has been produced.
As for this blog I'll include the build notes and photos but will not pass any judgement on the original docs, who designed what etc I need to document it and that may mean perhaps improve on what is available for others.
The HB-1A I am actually building 2, one is for someone else, so I will get the opportunity to have and see an unpopulated PCB and see about mods e.g. Q1/Q4 attenuation/rf gain.
Posted by M1KTA at 10:58

I too have been tempted by this kit, and seems to compare nicely against the KD1JV designed PFRIII (http://www.qrpkits.com/pfr3.html)-- Which is out of stock again, or the ever classic and very pricey Elecraft KX1. I will be following your progress with interest.

PS: I read a rumor somewhere that these are the last of this series and a newer series is just around the corner from these same Chinese builders. I'm not sure what more features they may add, or maybe a big brother version with SSB suitable for PSK31 et al. 73 ki4SGU

I'm looking forward to following your build of this kit as well as your opinion of the manula/instructions.

As the kit is mostly surface mount your expectations vs. your actual building experience will be most interesting.
I tried to research the building manual, but for some reason, I was unable to download it for review.
Hopefully the instructions will be in clear English. A kit that contains mostly surface mount components coupled with a poorly written manual could be a disaster for many would be builders.

Thanks everyone for comments, I have some assembly instructions written in Chinese they are being translated, it seems to be a through hole kit. I will wait and see what the kit contains to confirm that.

I also ordered one of the kits. I need to build another QRP transceiver like I need swine flu, but, oh well.... Should be fun. I've built plenty of surface mount stuff, so that part dioes not concern me. I'll enjoy following your exploits, and will be ure to pass along my observations as well.
73 de Bruce, N1RX

I ordered two copies of the kit about a week ago - it was supposed to be shipped yesterday so I haven't seen it yet. I and SM0GNS will do our best to document our building efforts online. I'm thinking about setting up a wiki for this purpose. Tentatively I have already a site: http://hb-1a.golonka.se where you may create your account and play around.

I received a Pdf Chinese manual from Yimin, and it actually translates quite good in Google Translate. As long as you know exactly where to put the surface mount components I think the kit is doable... Now I just wait for the kits to arrive.

Anders, (and all) thanks for comments. Yimin sent me the same manual as you have on http://hb-1a.golonka.se... that has me a bit confused... As I asked and the kit coming is SMD. The docs are for a through hole later version than the HB-1A. I think the PCB should say HB-1A3 but in the Chinese doc the images are of PCB marked HB-1B and HB-1C so a bit confusing. Maybe that means that the Q1/Q4 MosFet bias issues are resolved? ... it will be interesting to see what arrives.