I subscribe to the RSGB -LF group emails as one day I might get a NoV for 500kHz. Part of the new antenna builds will be aimed at improving my antennas for this band.

Last xmas during the GQRP xmas contest I operated cross band (3.5MHz/500kHz) manual CW with several that do hold NoV on 500kHz. Operation on 500kHz is a very narrow band and I found my FT817 could be used without any modification what so ever to RX the signals so I connected it to my 6BTV vertical adding a base loading coil 'bucket load' (Literally a bucket and c200m of multistranded wire wrapped around the bucket). Adding the base coil made the signals jump maybe 1-2 S points. I parked the RX on 502kHz and listened a lot.... after a time I heard some of those I saw post on the reflector so I thought here goes nothing... and emailed one or two and asked if interested in x band operating.

Operation this way the first time you do it is odd as you RX on 500kHz but tx on 80m frequencies. Still once you get the hang of it, it is pretty easy. Having a rig that operates split helps a lot but you can do it manually with two rigs.

Anyway suffice to say I manged a dozen or so contacts even with my completely awful cw and even posted on GQRP list after working Ian G3ROO this way. The LF activity seems to have increased of late as the nights draw in again.

Note that the humble softrock RX can be employed on 500kHz and I have a dedicated RX built just this way. 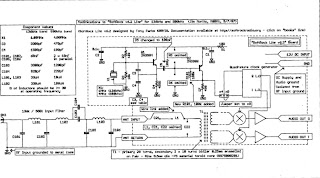 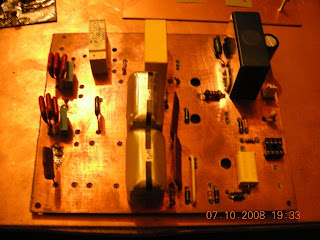 I also built a clone of M0MBU TX starting from the design in RSGB LF Today using MOSFETS, This is a picture of the final board, so don't get into problems I have not added the MOSFETS to it so cannot be used for TX. You can see the holes for the TO220 heat sink screws in the middle of the board. The whole board will be bolted to a heatsink. I modified the design to use a DDS based VFO not a 4MHz resonator (didn't have one at the time) and a divider network. The VFO feed comes in to the two holes on the bottom right, with the 4427 IC (8 pin DIL) just above. The DDS VFO uses a free AD9851 but with DIL dip switches not a PIC and rotary controller (originally an idea from Hans Summers http://www.hanssummers.com/radio/dds/index.htm). There are many different designs out there for LF capable DDS. I created the TX PCB layout with Express PCB and blue press n peel film and then etched it. The track side shows the wide spacing of the different parts. More as an exercise if could it be done that should it be done I took this and a few other project boards to FDIM show and tell. Most of the components were salvaged from an old APC UPS which was a wonderful source for the high value capacitors needed. I even include an LPF on the board (left hand side the paired up capacitors) as I wanted to use this /P from a beach with a kite antenna.... maybe one day.

For the shack a PCB box containing a 7 pole LPF for 500kHz was also constructed complete with SO239 connectors the design came from http://www.g0mrf.freeserve.co.uk/lpf.htm I think, not checked log, that G0MRF was one of those xband QSO. 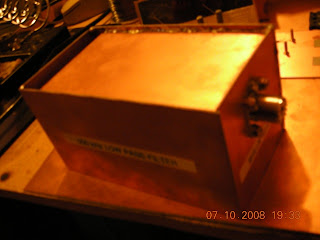 To obtain an NoV for 500kHz it is important that you show you can meansure the field strength of the antenna (this site is for LF generally http://www.strobbe.eu/on7yd/136ant/#ERP) so I also started to build a field strength meter following a design by Dick, PA0SE 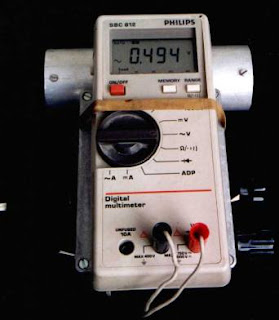 http://www.wireless.org.uk/pa0se.htm using a cheap digital meter. I bought a box of 10 of them for £2 and I have employed a few about the shack, one as an RF probe another pair monitor the V and I of a HB power supply. I have a wide band FSM using an AD8307 as well so might see if I can add a band pass at the front as well.

Lastly you have to demonstrate that you can measure frequency and I have a PIC based frequency meter that I know will work down to 100kHz ready for use. I calibrated it against a 1Mhz crystal oscillator but I probably have to do better than this.

All of this was a while back now and I was not successful with my NoV application earlier this year for some reason, I didn't get a reply even, but then the 3B8 trip and other activities took over. I will reapply shortly and now the ERP level is 1W which is 10 times what it was at 100mW last year. I might try a qQRP station on 137KHz for fun, SPRAT 123 featured a 137kHz qQRP circuit in a build contest by John G8SEQ 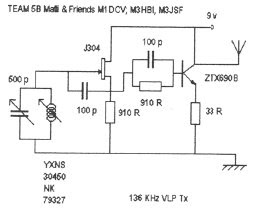 I might even add a small PA to c5W as I note I have some IRF630 salvaged from that same APCUPS mentioned above. For a 137kHz antenna a fishing pole supported wire and base load will be employed. or I might try Finbar GI4DPE (another x band qso) design for a spiral (1/4 wave?) at 8m AGL.

Just today I noted that this was a suggested possible tuner on the LF group lists: 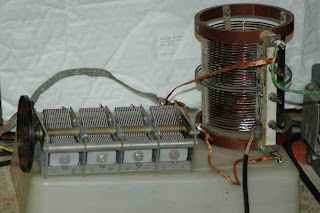 And as I have an almost identical setup I used for a tuner initially I will be using this for my 160m 1/4 wave antenna. The coil on mine is wound over a paxolin(?) former with added tap points, the capacitor on mine is almost identical with 4 x 250pF sections. When in place will add details of my 500kHz station.

Re: [GQRP] 500kHz QRP crossband QSOs
Hi Roger (G3XBM),Whilst waiting for my own NoV to arrive I am listening out on 500kHz and like you managing a few x band qso on 80m.Inspired by your comments on GQRP last year and the RSGB conference talks on LF my initial RX were FT897 or FT817 with no modifications. (Advise at the conference was to consider 80m if cross band QSO required).I have an SDR RX on 500kHz based on a softrock I modified with a reused a 4MHzxtal from a PIC project and the divide by 8 option on the board (For those that may ask Tony Parks, KB9YIG will sell a softrock lite V6.2 for just $11 sent to EU and the modifictions can be done for pennies. The 500khz band is just 3khz wide so the whole band activity can be seen on the SDR display, infact I see 480- about 527 kHz! I used axial inductors (a bit fatter than 1/2 W resistors) fora new front input filter. The L are 10uH and 100uH. I used Rocky RX software.If you have a 80m CW setup and can RX on 500kHz as Roger says have a listen in the evenings as some of the operators, there are only about 40 in UK that have an NoV (several are GQRP members) often call for a x band qso on 80m (stating the qsx frequency ) I know many were interested to hear my signal reports as a'new kid on the block' so to speak 500kHz wise.I managed a qso with GI4DPE (Finbar) him on 501.33khz and me on 3533khz. (Finbar has managed a transatlantic qso on 500kHz), amazing when you consider his ERP was 100mW. Similarly with G3ZWH and G3ROO the same night. So far heard/worked themand G3KEV, G3GMH, G3XIZ and GOMRF, cw is the primary mode although hearing some RTTY as well as seeing QRSS in waterfall. I have been surprised at how quiet the band is noise wise compared to 160m or 80m (or it is around me).The signals are easy to copy and maybe just me but the cw is nice and slow.73 Dom M1KTA
Posted by M1KTA at 09:47