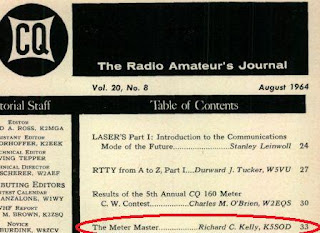 How many times have you bought a junk meter or salvaged a meter (like I did just before w/e) from some old bit of kit only to find there are no markings or worse the scale is bespoke, nothing to do with mA or V or worse apparently depended on some parts that are no longer connected.
Probably old hat to any that know, to those that don't/didn't like me maybe this might be of use:
Going through a box of old magaznes found an article from 1964 about just this subject. Then I saw the circuit and thought there has to be something missing but there wasn't so I tried it and it works.
The circuit as you see above is so simple.
The process to use it is not that hard either (from the article page 33 by K5SOD):
I will post images of the build and test steps, I used 4mm banana jack/binding posts from Maplin at AB, CD and EF. The article says you need two potentiometers, R1 (1K) and R2 (200k) the ones I used are 1K and 250K that happened to be in my junk box at the time. The article states that potentiometer with similar values can be substituted, and linear pots are best. I salvaged a couple of dual AA batery holders and used them and a couple of rechargable batteries.
It takes longer to tell about how to use this than to actually perform measurements. Once you have been through the process a couple of times, it only takes a couple of minutes to fully investigate a meters characteristics.
What you do need is a meter with known characteristics and I used a good old elcheapo DVM from my collection (10 for £2) and it has some small amp meter ranges, to use with really small scale meters you might need something better. I suspect an analogue meter will work just as well.
Let’s assume that you know absolutely nothing about your “unknown" meter which is usually a safe place to start.
Place the unknown meter between C and D, The orientation needs to be so that positive voltage applied makes the meter move, most normal meters that means the positive lead connects to C. I have a couple of centre zero meters as well so the connection could be either way. With the battery connected select full scale on the switch position.
Rotate R1 for maximum resistance. Many pots have maximum resistance (which will be minimum current) when the control is fully CCW, but the direction of travel is arbitrary and unimportant. The important thing is to be sure it is set for minimum current to start the test.
If you have it set your DVM to read 200 mA, or more, then insert it into the circuit with positive lead to B and negative lead to A. Always start with a high current setting on your DVM and work down.
You may see absolutely nothing on the meter, adjust R1 (reducing it) to obtain a full scale reading on the unknown meter by reducing the resistance. If a full-scale reading cannot be obtained with R1 set for minimum resistance, the unknown meter is beyond the current supply capabilities of the batteries. In such an event, disconnect the DVM quickly to prevent draining your batteries. This condition is probably due to an internal shunt in the unknown meter. This can be overcome as will be explained, later.
If you have a full-scale deflection on the unknown meter, but there is little or no reading on your DVM, set the DVM switch to read less and less current until you obtain a reading for the full-scale current on the meter under test. If you cannot get a low enough scale you need to find another known meter. Remember you could get there using another 'unknown/now known meter' with a small enough scale!
Anyway when the unknown meter is a FSD after adjusting R1 the THE CURRENT READING YOU SEE ON YOUR DVM IS THE FULL SCALE CURRENT OF YOUR (formerly) UNKNOWN METER. Easy isn't it?
As I was wanting to use mine as an audio level S meter for the Norcal-20 O built (maybe a good idea?) I wanted a meter with FSD of between 100uA and 500uA. The first meter I tested has a full deflection current of 200 uA.
Now before you do anything else adjust R1 for approximately 1/2 full scale, then disconnect the DVM.
Replace the DMM with a jumper between A and B. If like me you use banana plugs this is made easier with a short 4mm to 4mm lead.
Now re-adjust R1 for a full scale reading.
Change the S1 to Half Scale and adjust R2 for a half scale reading.
Set S1 back to Full Scale, and measure the internal resistance between E and F with your DVM.
YOU NOW KNOW THE INTERNAL RESISTANCE OF YOUR (formerly) UNKNOWN METER.
For this example, assume the internal resistance is 200 Ohms.
Your "unknown" meter is now very much known.

Makes sure the DVM battery is not low otherwise your measurements may be out.

I'll update the complications for meters where there is a very high internal resistance for a meter.

IF METER IS BEYOND MEASURING SCALE:

If a full-scale reading cannot be obtained with R1 set for minimum resistance, the unknown meter is beyond the current supplying capabilities of the batteries. That this condition was probably caused by a shunt being built into the meter. For example, a meter that has a scale indicating it measures up to 10 Amps, it may have an internal shunt already simply because most meters are built to measure 1 mA, or less if no shunt resistor is used.
Given that you are salvaging a meter, the next stage should not be a problem, surgery is required. That is, you must open the meter and remove the built-in shunt, then proceed as you would with a "normal" meter. The internal components are mechanically very delicate, similar to the insides of a mechanical watch. So, if you have the patience and dedication required to disassemble the meter, remove the shunt, re-assemble the meter and perform the Meter Master investigation as described above, you can salvage most any meter. Some are very easy to get into some seem to be sealed within plastic, your milage may vary and may not always be successful, but it will be a satisfying end if you are so inclined. If not, its best to simply toss the meter into the nearest trash can and forget about it.
One piece if kit contained these meters: (images to come):
Posted by M1KTA at 12:11