Every QRP OP needs an accurate qrp meter that will work at 5W and less. Many commercial meters seem to need 5W or more to even move the needle. I had to modify my original meter to be able to show 10W as it was a 100W VSWR....

Back in May 2008 I spent a week with Ken Evans and Ted Bruce (and a few other amateurs) at FDIM/Dayton 2008 and they mentioned the NoGaWatt meter so I thought I'd have to try it.

This is a fine example from N5FC and shows how small and neat these really are: 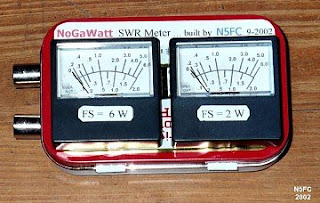 The project docs are here:

At the 2007 GQRP rally Henning Mikklesen OZ4XF gave me a pair of dual meters which are high quality dual channel VU meters surplus from some B&O project that never happened. The scale is 250uA FSD and a little more that the NoGaWatt project so I will adjust things a little.

I used a couple of Ge diodes bought from Harrisons (Local repeater group rally at Bottisham, wx was cold and wet that day and did the round trip 20+ miles by bicycle with xyl!) and two 47 ohm (matched from a big batch) 10W resistors that measured 49.2(ish) ohms. I also have a load of 51 ohm resistors and I have another version using a load in series/parallel combinations to obtain 50 ohm. I switched the trim pots for minature rotary pots after proving the construction worked as I wanted to be able to adjust the scales.

In HB style I have used Double sided PCB to fabricate a sloping front box, I was going to try and use the humble backed bean tin 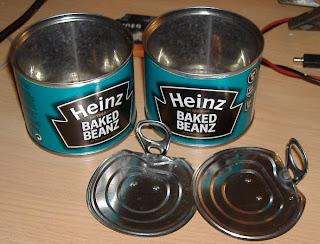 (http://www.hanssummers.com/electronics/equipment/bcdfreq/beans.jpg) but didn't have enough as the green bins were just collected and xyl threw out my stash of tins. The meter being almost 4 1/2" across meant this was never going to be an Altoid project.

I initially wound the FT50-43 with 24SWG wire but will replace the single turn with a length of RG174.

I have a load of 50 ohm 100W chip resistors so adding on as a dummy load. Put 4 out just to see if would fit as also available in smaller 10W variety also TO220 so would put them on back with a switch of the VSWR meter and have a dummy load too. 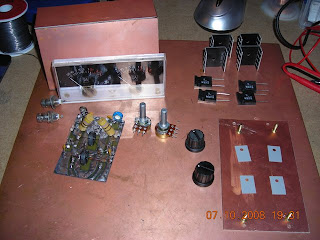 I am also playing (right word?) with PIC variations and I have some 2x40 (yes 40) character displays from Diz W8DIZ and I have an initial PIC VSWR working that shows the fwd/rev and VSWR as figures on the left and moving bar graphs. When complete and stable I'll add the details. I am using a 16F874A (same as 16F877A but 1/2 memory).
Posted by M1KTA at 07:58