QRV from EU-172 this morning 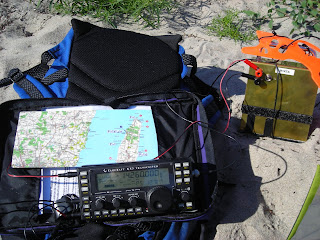 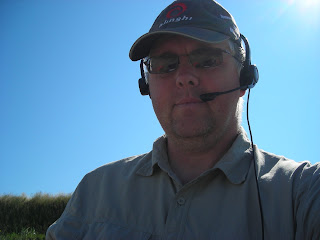 The ugly operator... note the essential hat as even in the morning the sky is clear and getting very warm. Apologies for the necessary unshaven somewhat scruffy appearance so essential when running a /P IOTA station :-)

Station as always ... KX3 10W from 7 AH SLA into my homebrew vertical dipole for 20m right at the waters edge (see video) QRV from 0715:UTC until 12:45 UTC when band died (for me almost like a switch went on and S9 noise from Russioan broadcast stations and could not hear anyone through it) and KX3 power was folding back to 5W as battery volts had dropped (had used last night as well and was not recharged).

The local boats (off shore and 500m to the North) meant I had to use the NB in the KX3 for first time in ages as they had battery chargers running, the NB with a setting of 4 cleared the tatatatat noise immediately.

Short video again... UTC is TWO hours behind local not the one I said in video.