See my later post about the Sussex VT1 - Valve Tester as that is what I am building. 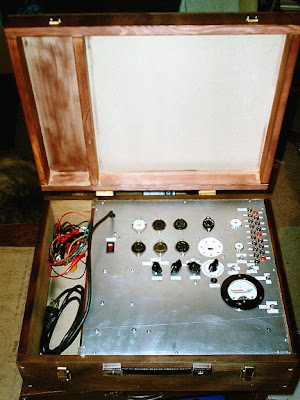 I have a need to test some valves but no real way (idea) how to do it so as well a checking some old manuals but they mostly just said plug the valve (or tube if was a US book) into the valve tester and check emission etc..... really helpful! So I did a google search brought up a couple of testers that cost more than my whole shack and then I came across this basic circuit which seems really simple. The 2SB546 is a high voltage PNP power transistor I might see what I have that might suit. The comment is any PNP with a Vce of 200 volts or higher. Beta is important here though. It determines the size of the bias resistor (39K 1W). The specified 2SB has a measured beta of 250. The suggestion is to use anything over 100 and preferably over 200 to keep the R small. 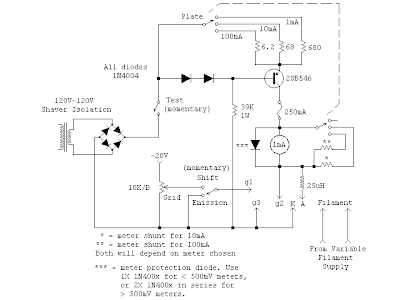 You connect the valve pins for K,A, G1-3 and filament to where they are on the above diagram.

It was for a 120V (US) mains supply so I have a UK 240V isolation transformer or a UK-US step down transformer I can use.


The notes on it are:


It can do both an emission test and grid-shift.

Because the CCS makes for a high plate-Z, it's prone to becoming an oscillator. The 25uH choke in the plate lead solves that.

No need to filter the supply, which simplifies things and the pulsing DC keeps dissipation very low.

The optional grid-shift tests statically the tubes ability to bias. Can also be used to match tubes (for DC characteristics). Nice compromise between simple emission tester and full-blown transconductance tester.

But, why not tie g1 to the plate and g2 like other testers? There is a problem with this, as shown here 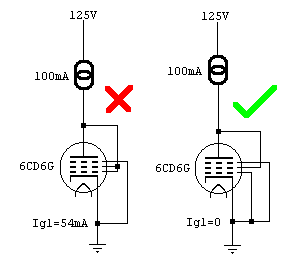 
More info (from the guy that shared the info  http://geek.scorpiorising.ca/GeeK_ZonE/index.php?topic=1803.80 called Gregg) follows this is the full circuit: 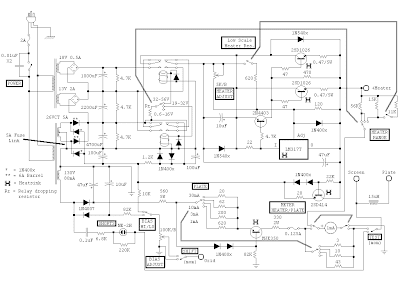 This is gonna need explaining. First I'd like to say, keep using the shaver transformers for the HV section as we have outlined in the past. You will need two, one to supply the plate (unfiltered), the second in half-wave for bias and short test. The only reason I've used the cap-filtered version here was to try and simlify the power supply. When I did this before, I eneded up with blown transistors due to the current surge from the cap. The 560 ohm, 5 watt and 330 ohm, 2 watt in there solves the surge, but there are two drawbacks:

- We lose out 100mA scale
- Junction heating above 30mA does cause "creep" in the current.

Fusing, use fusing. There are three here, one for the primary, one inline with the CCS (Murphy will make sure your Mullard EL34 will be destroyed to protect the primary fuse if all hell breaks loose) and the fuselink in the ground of the high current transformer CT. I made that from a 6" or so piece of #30 or 32 wound on a drill bit. It changes color at 3A and glows slightly at 5A and can handle the cap-charging surge better than a real fuse. It severs, the whole filament side shuts down

I had a bugger finding 12V DPDT relays for under $10, so I used some 6V ones the local electric place had a surplus bin full of and added a big resistor (56 @ 5W). I just left that value open for your calculations depending on what you have.

The rest of the regulator is straight out of the National Applications sheet. The sheet calls for tantalum input/output caps on the 317. I used the special HF electrolytics for SMPS use with no ill effects. The applications sheet also mentions this needs for stability, a constant 30mA current drain. I tried without, and it does need it. The 2SD414 (or any medium voltage (100V) NPN with a dissipation of 5 watts will do) is referenced to the -16V rail and guarantees a nice 30mA draw from 0.6V to the output's maximum of 56V. It just needs a 5W heatsink.

The pass transistors heat dissipation can be calculated by the Vdiff*maximum expexted I draw. I could have used one pass transistor, but already had the two mounted from earlier experiments where they had an 80W total dissipation.

The range selector, relays and supply voltages are such that there is no more than 24V across the regulator on the high range and about 16 on the rest. Referencing the regulator to a negative voltage on the low range allows the output to go as low as 0.6V, perfect for those weired 0.7V filaments and 0.8V filament Russian VFD's.

The meter resistors on the voltage range switch are fine for any 1mA movement for the output voltages expected. But, there's a twist on mine that I *wouldn't expect anyone else* to do, and that's the "Low Scale Heater Resolution" nonsense. The meter I used for this is very tiny. Yeah, I have bigger ones, but (stubborn Dutchman mode) I liked this one.  On the low scale and with this switch on (use the other position for absolutely everything else), it makes the meter read 6.3V full scale and the heater voltage adjust only go as high as 6.3V. I did this because it was too touchy on the low, low voltages. It would be bad indeed to be testing a friends expensive something-or-other with 2.5V filament and blow it because someone across the hall sneezed.

I custom made a meter faceplate for this and has the points marked for all common filament voltages.

The current shunt for the meter will be different for anyone else's though. The meter I used was from a 30's vintage VOM and had the internal resistance calibrated in such a way, common 10% resistors could be used to make the VOM (one of the reasons I liked *this* meter). So, don't expect these everyday 5% values to work for your meter, unless you're lucky.

I scale and CCS... we've covered this before and is the same. But the meter scale for this is worth mentioning - because of the predictability of plate current, rather than making "50%" the pass mark, I've made 80%+ the pass mark, 60-70% a questionable and below 60% a fail. Choose the positions well, small hi-mu tube, little current. At 1mA, it's safe to test tubes with a 90V maximum plate voltage, because the tube draw will pull it down. Higher settings will dump twice that on it and the poor tube unable to pass that much current to pull the voltage down will make the SS gods happy.

Bias control. I've given the tester two bias ranges, 0 to -15V and 0 to -100V for testing high/medium mu and low mu tubes respectively. In the normal position, the gid will be at 0V. Great for testing emission/life/merit, whatever ya wanna call it. Now, we can deduce from curves (or known good tube) at what voltage it should cutoff at, for a given plate current. Just dial this up on the bias and shift the grid. Unless it nosedives below 10%, the grid fails. Because it is operated in a linear mode, I've made "tick marks" on the meter to be used as a way to match tubes at different points. We know better, but it helps to be able to say "ZOMG! MATCHED PAIR L@@K!!!!" and be able to back it up with numbers.

The short test is borrowed from plenty of other tube testers as it's accurate and elegantly simple. A working tube of anykind will have a diode effect. The neon bulb is fed through a cap which acts as a dropping resistor (with some help from a 6.8K resistor because darn it, I just ran out of 0.08679376945 uF caps yesterday) and goes straight to the plate (or other element being tested). If the tube is good, you'll only see a little flash as the cap charges. If it's shorted, the neon lights continuously.


Another builder put up his font panel, I can see there are B9A and Octal bases and couple others possible. 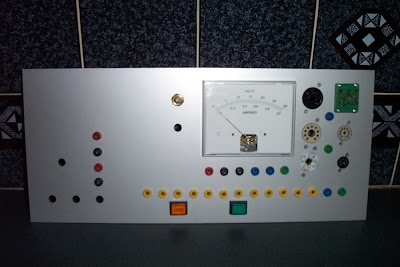 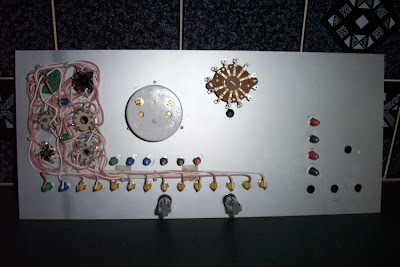 I have also been advised to look at http://www.vintage-radio.net/forum/showthread.php?t=48853
Posted by M1KTA at 10:53