The fault diagnosis on the HRO has lead us to belive it might be a failed detector valve and I do not have a spare 6SQ7 or one of the capacitors has gone... so building an ESR meter.

Measuring a capacitor’s ESR (Equivalent Series Resistance) is a great way to assess the condition of a capacitor, vintage or not, particularly electrolytic capacitors .

The design isn't mine, it is based on a series of op amps (TL082, I'll use TL072) that feed a reading into a 100uA meter... (I bought a few 50, 100 and 500uA off ebay a while back) and everything was from the junk box and was cribbed from a old radio magazine. It also has an audible alarm too. I had to substitute a couple components, homefully they will not be too critial but I can replace them if needed.

Not boxed up yet and just built on a off cut of vero board. 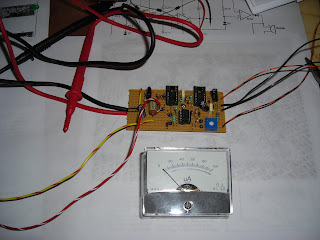 I used sockets for the TL072 but did not have any 8pin sockets so used 14 pin sockets instead.

I'll post some more photos of it and maybe an MP4 video of it working.

BTW you can use an ESR meter for more than just measuring electrolytic capacitors see here for more info
http://www.electronicrepairguide.com/esrmeter.html

After I had already almost finished building I also found this page on the web.
http://kakopa.com/ESR_meter/

Like that author I didn't want to go and buy an expensive meter when I could build one for pennies and have fun and learn something new in the process.

The design you built was By Alan Willcox, it is the MK2 version and was published in Television Magazine over two issues - Dec2004 and Jan2005.

Alan willcox would have been pleased you constructed his meter design. He died recently. There will be available a MK3 version which is an add on to a DVM.

Please Credit Alan in your Blog.