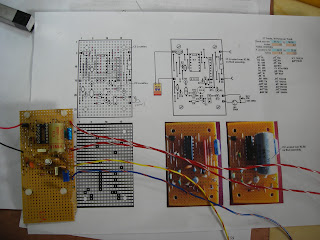 I didn't have a resistor network for the 5 680ohm resistors so I just made one up from 5 discrete resistors. 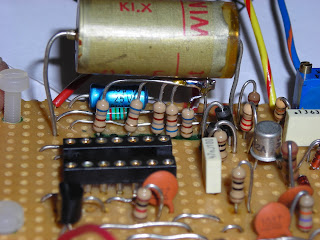 I think this meter might be suitable for conversion to a PIC with an LCD readout as it is a simple AC ohmmeter. The signal is applied to RA1 or whatever of a PIC and sensed. I might play with that some more.

The other meter I built earlier I'm going to to box that up this afternoon, along with a simple 555 based 1KHz oscillator.

That's odd. In mine, I used a 3k3 fixed resistor as R17, and a series preset 22k pot to zero the meter. Using a 50uA meter, with the cap test leads shorted, I had no difficulty getting the meter to zero (right hand end of the scale). Yyou've obviously had a poke around with your scope, and might like to check the readings against the following:

From the junction of R8, D5, D6 and C5, there should be a waveform of about 180mV peak to peak, but it’s important to note that this is only when the test leads are shorted, or a good cap with a low ESR is connected to them. This AC waveform then passes via C2 to the base of the 2N2222A which is an AC amplifier with a gain of approx 10.5. It's role in life is to raise the 180mV p-p input to nearer 2 Volts p-p. This then passes to the meter rectifier D1,2,3 &4, for the meter movement. But without the test leads shorted, or a known good electrolytic cap with a low ESR attached to the test leads, there will be zero Volts at the input of the 2N2222A, nothing at its output, so no deflection on the meter. The meter rectifier enables the meter to function as an expanded scale AC voltmeter. Full scale is zero Ohms, midscale is approx 10 Ohms. There is no DC output until approx 75 Ohms of ESR is seen at the test terminals, (ie, a bad cap), at which point the meter will barely deflect.

(The role of the cap C5, stated as 1uF in the VE17T original article but shown on his board as 0.47, is to protect the meter should it be applied across a charged cap. It doesn't have any bearing on the functioning of the meter).
Posted by M1KTA at 14:14