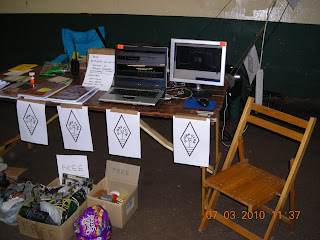 Ran a GQRP stall at the CDARC rally with Clive (M5CHH) and ran a demo of Simon (HB9DRV) SDR software with a Softrock V9.0 by Tony Parks (KB9YIG) and used a W3EDP antenna. Plenty of interest and was kept busy all rally long. Should have had some kits available for sale... note to myself for next time.

Adding the laptop, external speakers, sdr radio and antenna made many stop and take a close look. It was fun trying to explain to small groups how sdr worked and how once the signal is digitised there are all sorts of things that can be done with it. Several said thought I was cheating some how when showed them the actual SDR hardware! To be fair I also showed M0KGK and Rocky SDR software side by side with Simon's new software a couple times but most stated there was no comparison between them. Having a wonderful AF spectrum filter display I took an extra flat panel and attached it to the laptop and showed how the filtering worked. 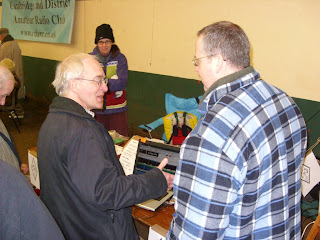 Live demos are always a bit risky but as if by magic several stations were fighting over a DX contact in a cw pile up which gave a perfect opportunity to show filtering down to 50Hz (yes fifty not 500Hz) and there was a contest on and picked out many US stations on 40m and again showed the filtering to sub 1.7KHz being able to separate the SSB signals easily... now that wowed more than a few. Positive we had a radio vendor over at one point observing.

We sold out of all the SPRAT CD's and the Drew Diamond books we took along. 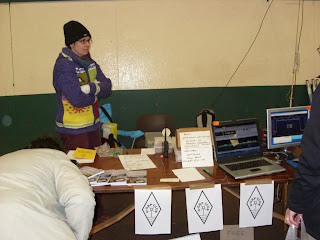 Many thanks for the support from GQRP members that came and said hello.

For those that asked today please get in touch about building the Softrock and setup help.

The rally was a great success. Dom brought along a 40 M SDR front end with Simon Brown's latest SDR (Beta) software he is testing. I rigged a W3EDP antenna with a hb tuner to feed it. That certainly gathered a crowd. He also brought along his XYL Christine who was the star of the GQRP stand. Essentially we (she) sold all the Drew Diamond books, all the SPRAT 1-140 CDs and all but two of the M0JRQ antenna books. Christine did most of the sales in the first couple of hours. 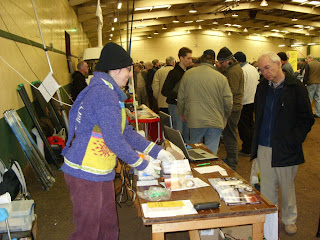 It just goes to show that a pretty woman on the stand beats an Old Fart any day. We were pre-charged £15 for the table just the same as any other trader, so Dom brought along some of his junk and could have sold several SDR kits had we known.

At least both Dom and I got to see the rally this year and I actually bought some stuff!
Posted by M1KTA at 18:05