I knew I had seen it somewhere, wasn't until I started collecting all the radio magazines for scanning I found it. Not that old either. 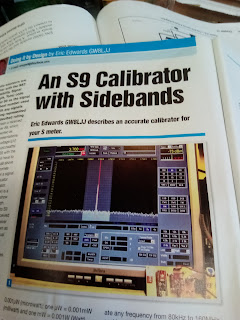 S9 Calibrator with sidebands using Si5351 and an Arduino by GW8LJJ, original code was by G7BHQ

Time to do some bodging.

Need to make sure CLK0, CLK1 and CLK2 are 1KHz apart about the CLK1 carrier freq.

Need to set to the different amateur frequencies.