Homebrew VP6DX like vertical dipoles for that next DX trip

I was intrigued by the antennas of the VP6DX DXpedition and I met up with some of the VP6DX team at RSGB conference in 2009/2010 and asked a few questions about the antennas and more importantly saw some better photos of them. Unfortunately I pretty much forgot the topic in the intervening years but I had bought some 4m poles and then some 6m telepocket poles (search this blog) with the express meaning to make up some of these 2 element phased vertical dipoles. A CDXC member directed me to the site by F4BKV recently that has more details.

I did not try to work VP6DX when on their trip but I heard them, and I have used vertical dipoles by the sea and added parasitic elements on a separate pole and used vertical moxons and the like on trips, all worked fine and the advantages of the sea are obvious but had a draw back in that it was slow if not impossible (especially whilst operating) to amend the 'path' of maximum radation and RX signal.

After trying a few options the most successful was a central vertical dipole and then sloping unconnected wire dipoles suspended in a sideways V format, initially taped to the antenna supports spaced 120 degrees from the centre.

(Maybe a diagram and photo here?)

This was attempted with the guys at SK7CA field day on EU-037 with a decent central mast when they successfully used three dipoles on 17m and were able to apply the directivity. The velocity factor in all the wires is important and a lot of trimming was required to get it to work. It works but the directivity is still very broad.

When I rediscovered the box of poles in the shack I thought time to look into this one more (and the idea for a /P cubic quad but more of that in a later post). Time to try and make something similar to the VP6DX (but much lighter) antennas that I could carry in 'normal' luggage.

The demo version of EZNEC is adequate for this purpose and I came up with a few permutations. The real challenge was trying to work out how to support the horizontal section and to make the cross arms as light as possible without adding too much weight.

The basic antenna has to use a 12m DX wire pole or one of two DX Wire short 10m poles (last were recently obtained from sotabeams). The cross members are shakespeare 4m fishing poles.

One of my build is yet to be put on the scales but the construction is light.

Right now these are MONO BAND ONLY.

As everyone has said that goes on any trip to an island and from my own experience get right by the sea and use a vertical the performance using the sea as part of the antenna is so much better. On one occassion in SM recently I went as far as putting the antenna support INTO the sand with a foot of sea water above it and a further 3 feet or so until the lowest part of the element, there was no tidal flow of the sea or it might have been interesting! The shoreline was a mass of very smelly some rotting stinky sea weed and this presented as a mat under the antenna the results were very good signals. But alas no directivity so I could hear stations I could not/did not want to work and that meant I had constant QRM for those I did. (Search this bog back a few weeks for the SM/OZ and IOTA trips for more details of that antenna)

Anyway time to do the analysis:

First BIG assumption, you need a good ground, I for this purpose said the ground was perfect, sea water is not exactly a perfect ground but it is very close. If you cannot get the antenna right by the sea then a vertical needs a large wire ground mat and the performance will not be as good as modelled here. I repeat if you are a mile from the shoreline forget it... you need to be RIGHT AT THE SHORELINE.

Don't believe me try a simple experiment next time you are at the seaside with your /P setup and build the simplest vertical dipole. Listen and TX right by the sea then before propagation changes too much move a mile inland (not down a river or similar) and do the same... you will soon see why renting a holiday home with sea views but a mile from the beach is great idea but for radio simply not worth it. Unless you use a different antenna.

My second BIG assumption is that the path away from the antenna in the direction I want is also all sea so for several wavelengths (even better if just sea most of the way).

Anyway these were the patterns I was looking for.

I used Conductivity (0.0303 S/m) Diel Const 20 which are EZNEX Very Good Ground values. In some locations the sea water is MUCH 'saltier' so these might be better, or the reverse. 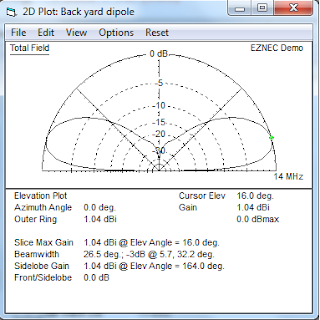 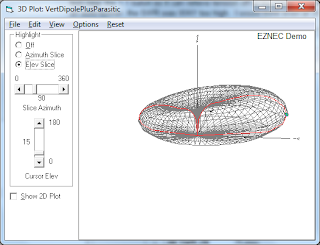 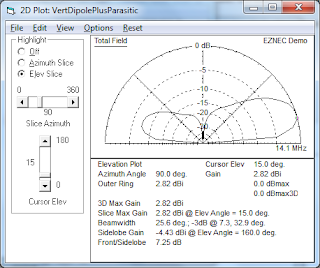 
The antenna has a lot of forward directivity, also notice a major null 180 degrees in the reverse direction. This is useful for so many reasons the major one being to null out qrm/qrn and it also means you will be able to tell if you have Short Path or Long Path propagation. Which for DX trips matters!

Your antenna site may have to be carefully chosen , Google Earth can help you a lot before you get there (a 5 minute decision whilst driving past also works!) so if you can put NA/JA or EU etc into this main lobe you will have a lot more success.

Hint: REMEMBER TAKE A COMPASS AND A GREAT CIRCLE MAP FOR THE DXCC YOU WILL BE IN. Buy a compass and put it in your /P kit bag.

On EU-138/EU-029 at times it would have been useful to be able to null out RA/UT stations 'behind me' as I was working NA. Likewise EU as I was working JA. I am sure I do not have to explain this to those who have used directional antennas before. On KH8 I found a perfect NE shore beach and I operated from there, placing my vertical dipoles on the beach and my tiny (to some) qrp signal, did manage some EU/UK qso it might have sounded so much louder with one of these.

I'd rather add dB to the antenna signal strength and not dB to the TX output.
Multiple reasons but I am a QRP fan and that means you can operate often without any electrics and only batteries.

As per the vertical Moxon experiments I did a while back (search blog for Moxon) and that Pete M provided analysis for (put link here) you will not that over a perfect ground the angle of maximum radiation is very low.