K8200 (which I will be refurbing to RAMPS) I will keep as a 3mm filament printer. Will add Octoprint and OctoLapse to this one. Now gone to shack. Orange and Black PLA.

Creality Ender3 1.75mm filament looks like will become main 3D printer. A RAMPS upgrade is on the cards if need to as the current M/B is a bit limited. Got to add bootloader etc, after see that the power resume has been added to the Marlin/TH3D source, or just add it myself. I have a BLTouch but got a glass bed on the printer so might play with if this is worth it. Looks like have to make up the PETSFANG fan shroud. Got a few different nozzles to play with as well as a few different colour filaments.. Will add Octoprint and OctoLapse to this one.

Not tested ABS printing but might, all PLA for now.

The 2418 CNC that will make PCB easily enough is now on workshop shelf, it it's own sound proof box (it makes one heck of a lot of noise routing PCB!) need to finish the calibration after they sent a new motherboard, I have a feeling I'll update it to the Arduino CNC Shield.
Will add a version of Octoprint and OctoLapse to this one I think. 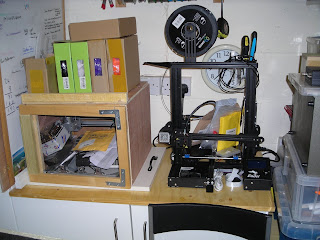 Found still had all the parts for another CNC engraver from an Instructables build. Not recommended now but as have it I suspect will build it at some point.
Posted by M1KTA at 09:11