Whilst clearing out some of the boxes in the workshop so I can get back to work I discovered a vacuum variable (8" long 3" diameter) I had kept from PhD days (1993-96). The original use I had was a planned magnetic loop (using two joined lengths of 22mm copper pipe (about 6.2m long) just one join using silver solder, to keep the loop resistance down) with a 2m diameter. 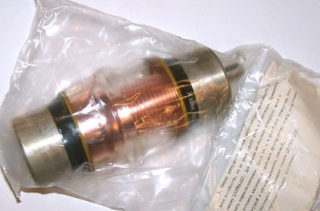 The capacitor would go across the gap in the loop.
a

The feed point was using an FT240 torrid (-43 I think) with 3 turns to an N type, the copper pipe would have slid through this.

The feed point is at the top of the loop, which sits at a slight angle to the vertical. The capacitor was to be in a length of 4" soil pipe, supported on an old 1/2" thick white chopping board.

The capacitor would be tuned remotely using a spare (NEMA17) stepper motor and a reduction planetary drive from a CNC project.

The loop should have been usable 3.5MHz right up to 21MHz.

However ... capacitors with clear glass envelopes and copper electrodes, if there is any air ingress you will see discolouration of the copper about the electrodes, slowly at first and depending on how humid it will completely darken and discolour. Originally the insides were all shinny, now they are dark so I expect the envelope has been damaged.

When I was a PhD research student in the Chemistry department in Cambridge University the gas handling line I used was maintained by the department glass blowers and I had accurate vacuum pumps. Given this I am pretty sure I could at one point have 'fixed' the capacitor and that was the plan, to glass blow on a small tube to attach to a line, then heat the capacitor whilst pumping down the interior and then to seal it again.

Now you can pretty much assume the pressure inside is at atmospheric not fractions of what it was originally probably near total vacuum.

I know that capacitors at atmospheric pressure (760 Torr, 1.01 Bar) have a voltage rating about 12-15 times lower plate spacing dependant than that of an otherwise identical vacuum capacitor (at 10-7 Torr). How do I know this... well lets just say during research if a capacitor failed I'd know about it damned quick. We used a thyratron pulse across a flash lamp at 5Hz and used a bank of vacuum storage capacitors. The voltage was up to 15KV. If one ever failed then audibly as the experiment ran it was like a fizzing as it shorted and the main flash lamp never fired. We used to have a selection of new 'spares' that we'd swap in. I never asked where they came from I think we had an Eastern European post doc in one of the other groups and they had 'acquired them', I never asked or where they went after we finished with them, several researchers before me had often throw them away (such a waste). Used to go through about 2 or 3 a year.

I might just use it in an ATU where the high voltage doesn't matter so much as the capacitance is fine and it requires multi turns 10-470pF.