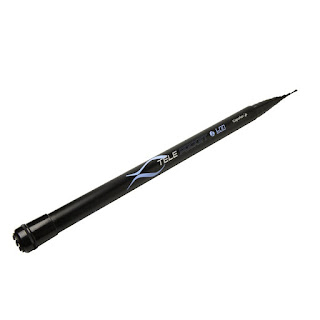 I was sent an email that asked for some more details on these ...

I showed a pair of these at Rishworth 2012 as I use them /P and on trips. The interesting bit is that they are only 580g and collapse to 0.58m so they fit in normal airplane carry on luggage (OK you have to put them diagonally in your bag but so what! I fit them into the Aluminum case I use for my /P radio kit on trips)

They are great for 20m-10m verticals and can be used and this starts to become a compromise antenna from 30m, 40m and on down to 80m with base loading  and can take a dipole or long wire (I use a W3EDP with mine) if the wires are not heavy the top sections will bend a lot otherwise!

Check out http://www.nonstopsystems.com/radio/frank_radio_antenna_80m_vertical.htm whose webpage put me onto using for 80m intially. My base loading is a lot less elegant and is usually using whatever plastic drinks bottle I can find and a KD1JV Deluxe Antenna Tuner http://www.qrpkits.com/deluxetennadipper.html and a couple of tap points to get the vertical approximately resonant.

If you can it is better to have the radials RAISED at the feed point and the ends tapering to ground. Not 100% sure of ther theory but experience says this does make a difference. The RX signals and reports tend to be better in the direction of the radials. I often do not put them out 180 degrees apart and the antenna is more of an L with two legs if that makes sense.

The two radials could (but I have never used them for this) be used as dipoles.

I was asked how I secured them... well I have become a fan of some plastic ground screws but I have also found that you can use patio table parasol bases. Beaches often have these somewhere.