It has arrived, it has arrived.... try to imagine jumping about all excited. Who said grown ups cannot act like a kid from time to time... 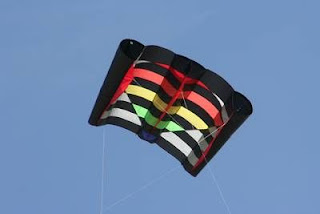 I have been messing about with flying antennas on the beach from a  kite for a bit with mixed success and though it was time to get something a bit better and bought one of these. It has a 6 foot span and seems to be a decent single line kite.

I have also taken advise and bought some Superbraid electric fence braid (keeps sheep in the field type) which is 6 x 0.2mm tinned copper conductors within  a monofil polyethylene rope. So it is strong AND it doubles up as the kite antenna. Must remember leather gloves though.

Easter w/e so I am sure I'll get up to The Goggs close to where I live or maybe the beach near Kings lynn and have a play.

Going to solder a series of 1Mohm resistors across a piece of PCB in a small box with some terminals to act as the earth leak circuit between the antenna wire and ground BEFORE it goes near the KX3 to provide a static discharge.