unun for the kite

Made up a unun for the kite. 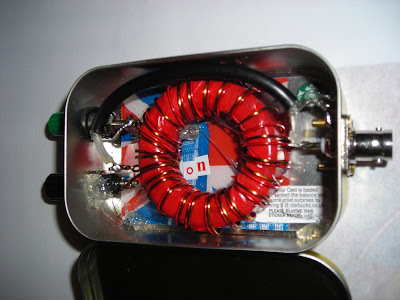 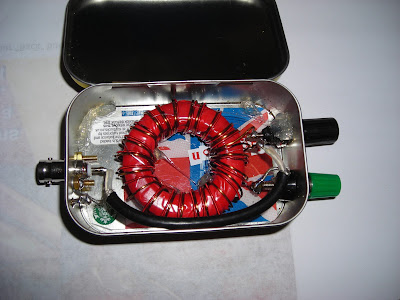 I am afraid not terribly scientific just a current balun. I just grabbed two colours of 18swg enameled wire (the enamel comes off under extreme heat) and a T200-2 and bifilar wound about 23 turns on it. I known that the more turns then 40m and below 'likes it'. I wrapped the T200-2 with electrical tape first.

There are loads of circuits on the web for an unun so I'll not repeat it here.

RG58 was used and I had to fiddle a bit to get it to fit, without prodding it about. I used some random terminals.

The RF ground side is bonded to the tin in several locations.

I'll have a separate antenna wire to ground lead, croc clip with some megohm resistors in as a static bleed.

The tin is a Swiss lozenge tin from 2007, yum finished thee sweets first then washed out the tine with acetone. I like these they are same size as an altoid but twice the depth so a T200-2 will fit. The card on the base is from Starbucks one of the olympic 2012 cards they had at the time I pick up a few every time I visit as they are useful for all sorts of insulation tasks and they fit the bottom of the tin.

As I expect will get a bit of use/abuse I have hot melt glued stuff together.

Asked so here are a couple of links.