Today whilst out dropping off something at a friend of my wife I was looking for a suitable location for operating at 481THz (optical) and the car right in front of me was hit by a pheasant flying across the road. The car never stopped but the pheasant ended up in the road side about 50 yards ahead of me. Dead obviously. So never one to miss an opportunity I collected it up and the pheasant will go into the pot.


UK law is great in this regard... if you knock something down, technically, if you pick it up, you could be accused of poaching but I suspect very unlikely to be so. However, if the vehicle in front of you knocks something down you are perfectly able to pick it up without fear of prosecution. The Law Is A Ass according to one of Dickens characters so things don't change do they?

Irrespective of the death wish pheasants appear to have around here...this has inspired me to call my opto TXRX build 'Phasianus colchicus', or Common Pheasant.

Some of the following images might not suit every one so if you are not into preparing game then do not read on. 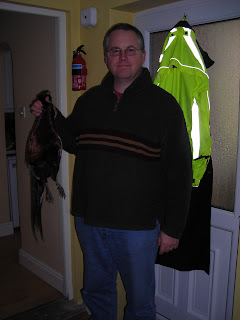 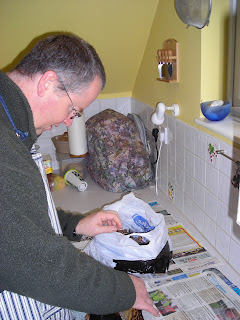 Plucking, start at the head ... 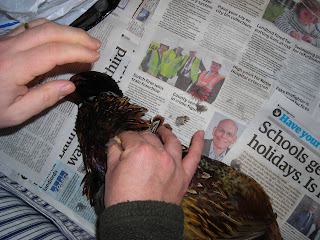 I'll not post the more gruesome images after this one....but this is where food comes from and I was brought up in the country and every time I do a long cycle trip it is amazing what you can pick up and roast on an open fire.

The RXTX circuit and images will follow.
Posted by M1KTA at 14:40

Good luck with eating Phasianus colchicus and with the light beam project named after him/her. RIP.

Pheasants must be the dumbest birds around and are always walking in front of cars.

In the same vein then, my 481THz project is hereafter to be called Vanellum, after Vanellum vanellum.

Thanks.... rest of farnell order just arrived so I'll be building the rest up this afternoon/evening.

Lapwing ? BTW it's the in-laws that are the bird experts (RSPB and all that).

We'll have to find something low lying and marshy to test our rxtx over... maybe somewhere in the fens?

Actually I think it should have been Vanellus vanellus. Yes, Lapwing.

Still to buy my drainpipes and get building the kit into something sensible. Target is something complete and working on 481THz by Christmas.

We'll worry about paths to work when the gear is going!

Ridgeons in Cambridge have all the 110mm pipe and fittings unless you have them already?