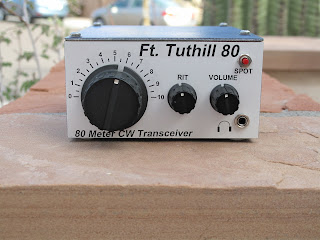 If like me you like homebrewing you might want to check out the FtTuthill80 · Az ScQRPions FtTuthill80 Transceiver http://www.azscqrpions.org/Introduction_to_FT80.htm which is a highly modified version of the Unichip (SPRAT 53 and http://www.hanssummers.com/unichip.html).

There is a yahoo group and one thing in it that I find very useful is Dan Tayloe in a presentation (in video here too http://www.azscqrpions.org/RCFiltersWEB.wmv) went through the design of the audio filters, that you could easily adopt to other applications.

Dan pretty well took the design apart and did a good job adding to the design but in the presentation I think missed the point of the original from Mike King G3MY and that was to build a rig using just one single IC and no other semiconductors. So if mentioned nowhere else it is here. Do more with less.

The project design brief was as a club kit to reduce the different unique part counts which is great but this does mean if not building as a kit, which I would recommend if not regularly homebrewing, that you can make substitutions too. e.g. I bought a pile of NE5534 single low noise op amps a while back and the design uses NE5532 duals but you can use two singles instead. This obviously means the unique part count increases.
There is a programmed PIC in the project too (there almost isn't a new project out there without a PIC or AVR in it these days) and there isn't code or hex available for it so you'll have to buy a kit to get it.
The use of different voltages in the Active R/C filter chain design I think is singularly the biggest nugget of homebrew information that could be obtained from the project too. As Dan stated to me in the group "DC receivers tend to have enough audio gain that they tend to take off and howl. I used Q1 as a "C multiplier" to provide additional isolation from the 12v supply to the first op-amp gain stage. This helps keep voltage variations on the 12v supply caused by the later, larger audio signal stages (IC3) from feeding back into the first op-amp IC4 gain stage. It does help quite a bit. This filtered 11.3v source is also used in the VFO buffer / tripler stages."
http://groups.yahoo.com/group/FtTuthill80/ contains the schematic and what is quite amazing pdf documents that detail PCB case construction, so if never done that before take a look. The group I am sure will take off once the kits go out which is imminently.
The one at the top of the post and these other images of Dan's own PCB chassis version of the rig are from the group. 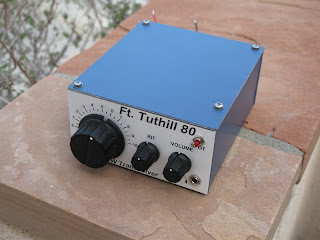 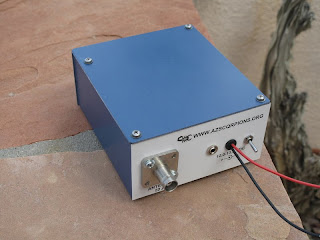 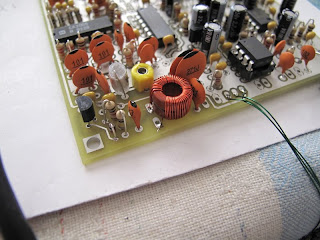 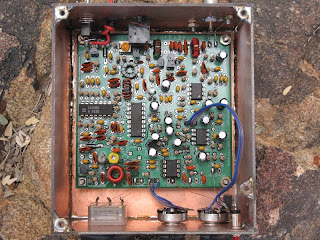 I will include images of my own manhatten build soon.

OK despite being near freezing in the shack, just sorted components ready for a Manhatten build. I am short one or two items but an order with Farnell or Jabdog should sort them out.
Posted by M1KTA at 08:43