Hi.... Another build in the starting phase. The Hands GQ-40. I will be attempting a build from scratch....

This is not a commercial attempt as a reintroduction of this I was interested to look at kits GQRP has covered in previous issues of SPRAT and as I am building some single band cw rigs this seemed like an excellent candidate.

An inside shot from one of the respondants from the GQRP list to my plea for help sent me this. It has helped a lot with the PCB layout. 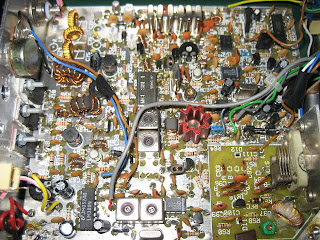 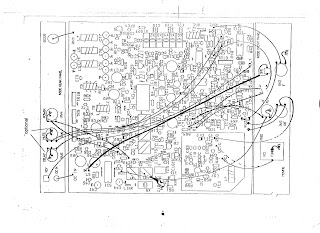 The original documentation available on the web contains little about the track layout but there is a construction diagram which aided with the layout.

Well some process as it was abit too wet and windy to play antennas in the garden yesterday (lost the QTH antennas due to a tree coming down about a month ago). 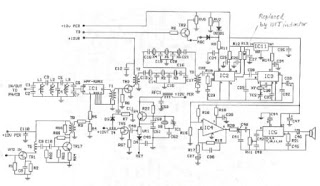 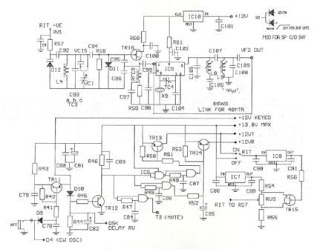 Here is the first draft of the new PCB for my GQ40 build I am putting together. It does have similarities to the original. 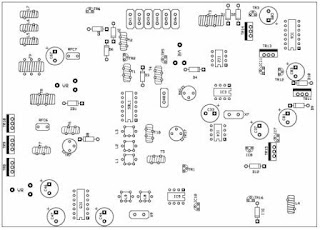 I transfered the schematics into ExpressPCB format and I am now laying it out. I have started a 2N240+ build manhatten style and I have a spare 5" x 7" piece of PCB so I am adopting that form factor (will make cases easier too!) which is larger than the original. At the moment some of the GQ-20 components still exist, I will strip those out. Note for SBL-1 I have not got the PCB mask but I know that a 14pin DIL socket is the same footprint.
When I get the PCB finished, etched and tinned will update the post.

All the components for this were available from the usual sources, cannot say junk box as almost everything in the shack is new or new old stock. Chris and Peter at Jabdog (original kitted this BTW) came through in excellent style with all the missing components.
Posted by M1KTA at 12:39

Hi Dom, did you ever finish the redesign of the GQ40? I built this rig and really enjoyed it.....need a fault fixing now but I'd love to tackle the 20mtr design. From memory the rx was extremely quite, silky and very selective with a nice filter...... most of my enjoyment is through building rather than operating so I don't suppose I worked too many stations with it.

Was not really a redesign more a new layout as I could not get PCB for the original.

It is somewhere in the workshop/shack.

What questions did you have?

Hi Dom, sorry for the delay, no questions I gu8ess I was just searching the net to see if I could find any details on the GQ series. If you could dig out that redesign I'd be very interested in a copy of it. I'm midway through one of Tim Walford's rigs right now but I would like to repair my GQ40 and ideally start a GQ20 next...... I get most of my pleasure from building the rigs, 'debugging and getting them working', rather than operating these days.
Thanks again.
Paul
pswarman at screaming.net