Modification needed for the Si570 output.

"...Mike Collins did a design review on the RXTX Ensemble and pointed out the a direct connection to the CLK+ output of the Si570 is not allowed in the manufactures spec of the part. The fix is to cut the trace that connects the CLK+ pin of the Si570 to T1. With the trace cut, a 0.1uF capacitor may be soldered between the CLK+ pad and the T1 via. Care should be exercised to make sure the capacitor does not short to the USB ground plane on that part of the circuit board...." 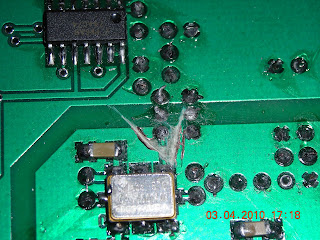 So I modified the build.

Cut a track and stripped away the surrounding PCB and soldered a 0.1uF across the gap. Ugly but it works. 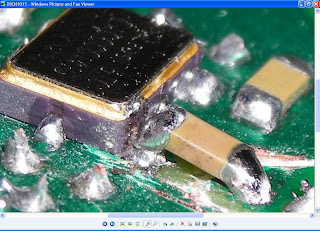 I am building a Softrock RXTX rith now and look for some support. I have an unsolved issue with tuning the Si570.

Is this blog still alive and somebody there who could give me some advise?

I'd seriously post any question on the Softrock yahoo group but you can ask here and I'll try and advise. I will not publish and comment if you don't want.