Well not expecting anything too surprising but playing with possible 160m antennas. 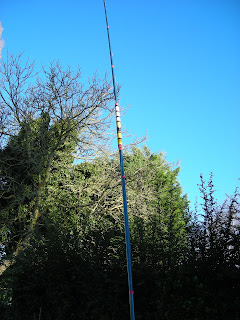 This is a 10m fishing pole, whole network of radials and I also connected to the shack earth side too.

The coil is wound ona 50mm pvc pipe and is bunches of 50 turns and some random numbers of turns in the middle, until it became resonant... about 1825-1850.

Anyway KX3 up and running and sending cq....

Added an extra ground stake in (6 foot of 22mm copper pipe and 6mm earth wire, directly into the underground river below surface).