Was at RSGB NRC active as GB3RS

I was at the mike of the RSGB NRC for a bit this morning. Christine (XYL) took me to Bletchley Park for a Birthday treat (it is on 13th but I am working). I remembered the licence at last minute, good job I did.. 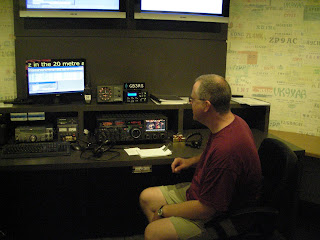 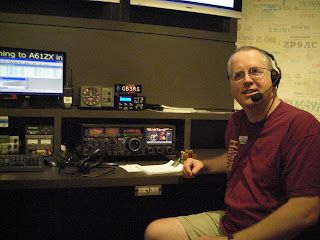 The FT9000DXmillionoptions is a HUGE rig. It was running 200W initially and to be honest turn the beam to any station and 100% if you could hear them you would work them. I turned it down to 50W to make it a bit more of a challenge. Antenna is a STEPPIR, but it is only about 40ft AGL so not really optimal.

The DL EU DX contest was on so only outside EU stations responding.

I was on SSB and worked 9 or 10 stations into Asiatic Russia, Middle East, 5B4AIF (Cyprus), Iran, Brazil... nothing spectacular really and there was an audience and someone else was running the log and real time plotting where on the world (display way above the photos) I was talking to at any one time. Active on 17m and 20m. The volunteer Peter (a G4) afterwards said is was much easier explaining what was going on when someone was able to make contacts and they could talk about what was going on. Having just come back from 6W and C5 I guess I am still in 'pile up mode' hihi so was a bit quick.

Bit of a shame no 'normal rigs' that the ordinary amateur might have, or might afford. I should have taken the KX3 and showed that off, interesting the operating slot to the right was completely empty! I feel a comment to RSGB about this...

The GB3RS call I'd have expected it to be really active but it did not seem so. NA stations liked to hear that were from Bletchley Park and all that meant though bit like GB2IWM at RAF Duxford.
Posted by M1KTA at 19:07