Retracting rulers for GP and sweeperino fun and games

I'll post some pictures soon but at w/e went around a car boot as Christine wanted to look at the stalls. I found one of those stalls selling hardware, always wanted to try it and they had boxes at £1 each so picked up eight 5m rulers. I will fashion a small square or ring that the rulers can attach to and you can then lay them out under a fishing pole vertical. 5m so just 15m up. The 10m ones (they had them) were £4.50 each which was a tad too much else I could see a 40m vertical happening!

And a GQRP member recently had some fun with the display on his build of the Sweeperino http://hfsignals.blogspot.co.uk/p/sweeperino.html. As I had already built this one myself a while back (I had a number of spare AD8307 and a power meter PCB after kitting the PHSNA project). I used an Uno rather than a nano Arduino but other than that just the same. Just to confirm the project schematic and wiring is correct I thought I'd rebuild it (schematic does say V2) breadboard style. Sadly I never kept my original notes etc as I lent, now appears 'gave' the project to an M6 who seems to have given up radio and evaporated. 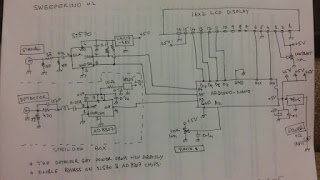 so I thought I would check this out first with a simple "hello world" type program, that also showed the elapsed time since the Arduino was restarted on the line below.

One of the first thing the project does on startup is to check that either an Si570 or Si5351 is present.

The pages do not say you need to go get both the Si570 and Si5351 libraries, but if you do not it complains on compile and fails. So fix that.

Anyway if neither is present it tells you, anyway mine worked fine.

You need to calibrate the power meter and the AD8307 will be linear from about 1MHz to well over 150MHz so you will want to callibrate it. I used a couple of simple canned CMOS oscillators 10MHz, 24MHz and 64MHz to create a callibration plot. This is for MY Power meter only, build another and this probably will change so I will not reproduce it here. See http://w7zoi.net/pmtr-build.html for how a power meter can look, does not have to be neat!

You should/might want to build the PM into a separate case (I would). BTW note the needle in most shacks will NOT be zero with nothing applied, You might expect 0V is 0dBm, but this will read way below that, even as low as -70dBm.You might want to look at... A Power Meter based on the AD-8307 from Analog Devices and W7ZOI Designed AD8307 Power Meter - Clifton Laboratories

The software to be loaded into Sweeperino. Download it from https://github.com/afarhan/sweeperino.

The unit can be used stand alone or you can also use it with some spectrum scope software and scan the frequency and measure the feedback. download the source code or the exe from https://github.com/afarhan/specan-ui but see Farhan's page http://hfsignals.blogspot.co.uk/p/sweeperino.html about how to use it.
Posted by M1KTA at 11:00

Asked what did I use to breadboard the Si570... well I had a couple of the board from here...http://wb6dhw.com/For_Sale.html